History of the Noble House of Abreu 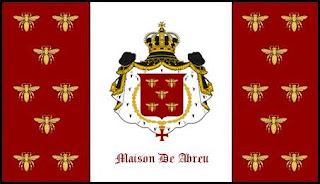 The Maison de Abreu (House of Abreu) is an ancient branch of the House of Normandy via the Countship of Évreux, France. Gonçalo Martins de Évreux was a famed crusader in the 3rd crusade who came to Portugal with Henry of Burgundy (Father of King Afonso I). Latter he joined the royal court of King Afonso I (Son of Theresa, Countess of Portugal) between 1185-1211, who became the first King of Portugal by achieving the independence of the southern part of the Kingdom of Galicia from the Kingdom of León. Lord Gonçalo Martins de Évreux was granted lands in Valença-do-Minho and Ponte de Lima (In what was to become the Kingdom of Portugal). It is at this junction that Évreux became phonetically "Portugized" into Abreu creating a cadet branch of the House in Portugal. Lord Gonçalo Martins de Abreu settled, founded a manor and built La Torre de Abreu. He gave his name to the courtly estate and the surrounding territory he now controlled. He is regarded as the patriarch of the present line. The incumbent Chef de la Maison is, Don René Léopold de Abreu y de León II, Seigneur de Abreu. Don René II is the 20th-partite holder of His office.
Posted by Don René II at 12:53 PM 1 comment: 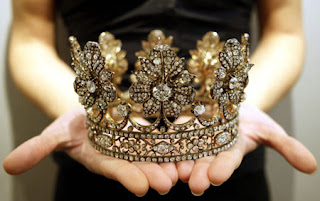 160 AD: Fornjot, King of Gotland
Reigned over the area now know as Finland & Kvenland
East of the Gulf of Bothnia, adjacent to the White Sea.

720 AD: King Halfdan 'The Old', King of Vestford
Son of Prince Eystein Svidrasson, King of Raumarike & Vestfold
It was said about King HalfdanThe Old:
“He Gave his men gold when other kings favored silver”.

846- 931 AD: Rollo The Tall, Baptised Robert I,
Son of Prince Reginald The Wise, Earl of Moer and Romsdal

After participating in many Viking incursions along the Seine, culminating in the siege of Paris in 886, Rollo was finally defeated by King Charles the Simple. With the Treaty of St.-Claire-Sur-Epte, Rollo accepted to become a vassal to Charles III of France, converted to Christianity and was baptized with the name Robert I. Charles then granted Rollo territories around Rouen, which came to be called Normandy. Robert I married the daughter of Berengar II, Count of Rennes (886- 896), Margrave (Marquis) of the Breton March (Previous lord of Brittania Nova, which became Western Normandy)

1090 AD: Lord Gonçalo Martins de Évreux
Crusader in the 3rd Crusade (1187–1192)
Came to Portugal w/Henry of Burgundy (Father of King Afonso I)
Nobleman in the royal court of King Afonso I (1185-1211)
Granted lands in Valença-do-Minho and Ponte de Lima
(In what was to become the Kingdom of Portugal)
It is here that Évreux became phonetically "Portugized" into Abreu creating a cadet branch of Évreux. Lord Gonçalo Martins de Abreu setteled, founded a manor and built the Torre De Abreu. He gave his name to the courtly estate and the surrounding territory he now controlled. He is considered the patriarch of the Abreu Dynasty.

1340 AD: Dom Lourenco Gomes de Abreu
Lord of the House of Abreu
Lord of Regalados, Barbeita and Valadares
And the castles of Lapela and Melgaco

1492 AD: Christopher Columbus found and claimed the island
Now occupied by Cuba, for the Kingdom of Spain.

1523 AD: Dom Antonio de Abreu
Portuguese navigator and explorer of the then secret "spice islands"
First European to discover Australia
Ferdinand Magellan was enlisted by the Portuguese Viceroy,
Francisco d’Almeida (1511), to sail under the command of Antonio de Abreu

1620 AD: Doña Beatriz de Abreu
Noble woman of the House of Abreu
(Daughter of Rui Gomes de Abreu)
Married Joao Fernandes de Andrade (from Arco) in 1640
It is during this time the descendants of the House came to Madeira

Short History,
H.E. Don Antonio José Alvarez de Abreu (Santa Cruz de la Palma, Canary Islands, Spain, 8 July 1688 - 28 November 1756, aged 68), Marquis de la Regalia by the grace of King Philip V of Spain on 8 July 1738. He was nominated as a Royal Surveyor and Controller of the Royal Rents and Taxes in August 1714 in Caracas. In August 1715 he started his lectures on law, the first chair in Caracas, in the Convent of Santa Rosa asked by Archbishop Francisco del Rincón, and on April 1716 married in the Cathedral of Caracas widower Teresa Cecilia de Bertodano Knepper, born 1691. They fathered four boys and two girls between 1717 and 1729, having ther last two males after returning to Spain. He was present in September 1720 at the wrangle of the Viceroy to destitute the Captain General of the Province of Caracas, Marcos de Bethencourt y Castro. By September, he was replaced and then moved to La Habana (Cuba) towards the end of 1722, coming back to Spain towads the end of 1723. In 1726 he published statements concerning vacant positions in the churches of the Spanish Empire, and the rents and moneys provided belonging to the King. ("Regalism" from the French churches, hence the marquis title given to him "de la Regalía" by the thankful Bourbon King Philip V of Spain, bringing "over 1 million reales to the Spanish crown).

Although the new Republic of Cuba did not give itself the power to create and bestow new titles of nobility, it did not interfere with the already established tradition. The families who possessed noble titles continued to use them, and the public respected their historical meaning and social position. This all changed when Castro's revolution took control of the island; soon the Communist government moved against these nobles, forcing many into exile. It was at this point that the family dropped the nobiliary particle, “De” before the surname. It was not until Don René Léopold De Abreu y De Leon II that the nobiliary particle, “De” before the surname was re-adopted as part of the nomen proper.

Don René II currently resides in the United States where he is active as the patron of The Hereditary Lords & Heirs Society and the Lords & Heirs Heraldic Register of Arms. Don René II is active in various NGO's and charities focused on diplomatic development and inter-faith dialogue. He enjoys the study of theo-conservatism, power politics, social stratification, dynastic law and leadership sciences. Don René II holds special regard for the preservation of the delicate social & religious balance in the City of Jerusalem and encourages all Christians to financially and prayerfully support Judeo-Christian interests throughout the world.

2009 AD: Don René II made a pilgrimage to the holy land visiting the city of Jerusalem to commemorate the contributions and sacrifice made by his crusading ancestor, Lord Gonçalo Martins de Evreux (3rd Crusade).

You are welcomed to join.